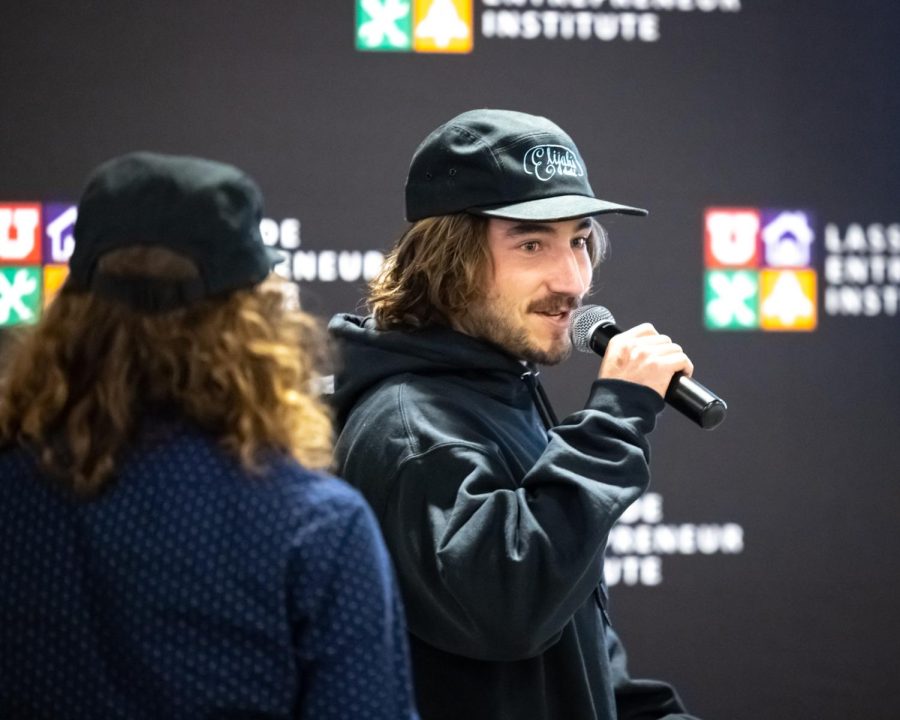 Starting out as a conversation at the JCC’s Bernie Camp between two tired camp counselors, Elijah’s Deli has quickly grown and is making its mark on SLC’s food scene. Co-founders, meat-smoking aficionados and University of Utah students Eli Wolk and Noah Gottlieb are the dynamic duo behind the deli counter.

Wolk and Gottlieb connected over their shared frustration of the “lack of Jewish food and culture in Salt Lake.” Most notably sticking out to them: the absence of a good Jewish deli. Gottlieb spoke of delis as places where communities came together. “They’re a place where people can hang out and have a good time.” They both agreed that Salt Lake lacked third spaces, or spots where people can connect with others outside of their normal circles.

Wolk and Gottlieb created Elijah’s Deli to address this lack of community spaces — and what better way to engage with people than through food? Elijah’s Deli sits at a perfect crossroads of people, food and Jewish culture, creating a casual space for people to connect through authentic Jewish food.

And what amazing food to connect over. Unlike many other delis around SLC, Elijah’s Deli is the only one to smoke and prep their meat in-house. Wolk walked me through how they make their signature pastrami, taking hours to brine, smoke and steam to get their delicious final product. They also brine and jar their own kosher dill pickles — better than any you can find in stores — and are starting up bagel production.

Between being college students and the outbreak of the COVID-19 pandemic, the deli has mostly existed as a short pop-up deli around SLC. While this has allowed for the deli to be more flexible and fit into Wolk and Gottlieb’s schedule, it’s just a start for them. Their goals of creating a community space that connects people, food and the arts have outgrown this pop-up model.

Elijah’s Deli gave us a flavor of their vision with an open mic event they hosted at Kilby Court. Getting into Kilby was a big deal for the pair not only because it gave them the space to envision their goals but also connects them to the venue’s magic, which helped launch the careers of bands like the Shins and Ritt Momney.

A large crowd of friends, family and complete strangers packed into the remodeled garage to get a taste of the deli. The event had a nice lineup of up-and-coming stand-up comedians and local musicians. From poking fun at LAX to an epic sax solo, there was a tangible connection between everyone. Elijah’s Deli created a space where you could slow down and forget about the problems of the outside world in sick beats and laughter for a couple of hours.

The event and venue gave Wolk and Gottlieb a chance to celebrate their own success while also uplifting the talents of others. Noah describes the event as, “an attempt to showcase the talents and give exposure to our friends and other younger people who haven’t had the opportunity.” This is what makes the deli so special — its dedication to building and investing in the local community.

With the help of the Lassonde Get Seeded grant program, Elijah’s Deli is starting to put down roots here in SLC. From bringing on a third member of the team to buying more equipment, the deli is beginning to take shape. They have also secured a more stable weekly location in downtown Salt Lake.

Starting in March, Elijah’s Deli will start hosting open mic nights and catering their food at Shades Tap Room every Wednesday. This will give them the chance to create a more “reliable place where customers can find us,” as well as “gives us access to a space that was designed for people to come and hang out,” Wolk said.

These exciting opportunities will help Wolk and Gottlieb to continue their work connecting communities here in SLC through authentic Jewish food and uplifting local performing artists. Follow Elijah’s Deli on Instagram to find out about their next pop-up and the rest of their upcoming events.