The Volkner Performance S motorhome has been around since 2019, with the latest custom unit unveiled this year at the 2021 Düsseldorf Caravan Salon, with an incredible price tag of €6.5 million or approximately $7.4 million at the current exchange rate. Volkner Mobil, a Germany-based, family-run business that’s into landyacht conversions, doesn’t play around when it comes to offering the best RV imaginable – and it always comes with a price to match.

We’ve covered the Performance S model before on a couple of occasions. It is one of the most luxurious and decadent motorhomes on the market, for which reason it is often featured on “most expensive” lists. Volkner Mobil says it’s in the business of making vacation dreams come true, the kind of vacations that include traveling with the entire family, with the vacation supercar on board, and in absolute comfort and luxury.

One such unit was recently reviewed by celebrity real estate agent slash developer Enes Yilmazer. Even though most of the features of the Performance S model have been covered here before, the video tour at the bottom of the page offers a better appreciation of what exactly makes this monster RV a $1.8+ million dream motorhome.

The highlight of the RV is the side garage. Initially designed for a MINI Cooper, it can house any other sportscar as long as it’s low to the ground, whether it’s a Porsche 911 Turbo S, as is the case here, or a Bugatti Chiron, as it happened with the unit displayed in Düsseldorf earlier this year. The garage is under the bus, which has a patented H-shaped chassis and consists of metal legs that lift up the entire motorhome, allowing for the platform to slide out on hydraulics.

When the garage is not occupied by the car, it can be used as an outdoor dining space. The RV comes with foldable patio furniture and an electric awning, and you can place everything on the platform so that it slides right back in when not in use. You don’t even have to pack the stuff back in. The garage is also heated, and you could sit inside it in bad weather, in which case it would be a sort of open chill-out space.

Its interior features all Alcantara and real leather, marble, wood veneer, and plenty of glass. The driver and passenger’s seats are heated, cooled, and have massage functions while they are able to rotate 360 degrees to face the interior. The driver’s seat is part of a mobile office unit, with a desk integrated into the cabinetry behind.

Inside, the living area can easily seat between 8 and 10 people on a gorgeous, albeit impractically white U-shaped sofa. The motorized TV that pops out of the furniture turns this space into an entertainment lounge. Custom touches are scattered throughout, like the scale model of the first unit of the Performance S ever delivered, a tiny leather stool that doubles as a side table, or the custom display case with hand-blown glassware.

The kitchen is fully equipped, though small-size. For a monster motorhome like this one, it’s almost confusing to see such a tiny dishwasher or refrigerator, but presumably, when you pay so much money for a recreational vehicle, you don’t plan to spend too much time in the kitchen. In other words, while impressive, this area is probably only meant to be used to brew coffee or throw together a light breakfast.

The 10-meter (32.8-foot) slide-out, which runs almost the entire length of the RV, adds 4 square meters (43 square feet) to the interior. That said, all the features inside remain functional even in travel mode.

The bathroom is located centrally, with wood pocket doors on each side. There’s a sink with vanity and, perhaps most surprising of all, a couple of bunk beds hidden under it. It’s the strangest choice for additional berths for a luxury motorhome. There’s also a dry water toilet, which is heated and features an integrated bidet, and a separate standing shower with a rain shower head and starry ceiling.

The bedroom is at the rear, and it’s so spacious as to include a couple of wardrobes and storage all around – a feat impressive on its own, as long as you’re not some cleanliness freak who faints at the thought of leaving fingerprints on the press-to-open mirrored wardrobe doors. The walk-around king-size bed occupies most of the space here, sitting under a skylight with starry LED details.

Power for this monster luxury motorhome comes from a rear-mounted 460 hp Volvo diesel engine. The chassis is also sourced from Volvo, with the finished RV weighing in at 18 tons. Despite its size, the Performance S handles smoothly, thanks to the integrated safety features, like adaptive cruise control, lane assist, emergency brake, and all-around camera system.

The Performance S is also suitable for going off-grid. This particular unit comes with an 800-liter (211-gallon) freshwater tank, a 600-liter (158-gallon) black water tank, and a 300-liter (79-gallon) toilet tank. A 2,400 kW solar panel system on the roof is connected to a 1,800 Amp battery pack, offering juice to run the appliances.

This particular unit is priced at €1.6 million, or just a hair over $1.8 million at the current exchange rate. Is it a dream motorhome? Maybe. Is it ridiculously and lavishly equipped? For sure. And that probably makes all the difference for whoever can afford it. 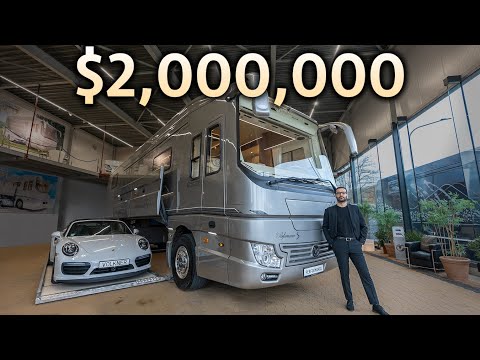