Marbella, Spain, Feb. 25, 2022 (GLOBE NEWSWIRE) — MetaBots, an innovative project that combines the Metaverse, NFTs, and the Play to Earn concept has launched its robot fighting league in metaverse MetaBots is creating a “Metaworld” where people can create a vast array of different boxing robots. These robots will be created using 6 different NFT parts that can be minted or collected in the game. The game will be Player Versus Player (PvP) in an arena-style format. 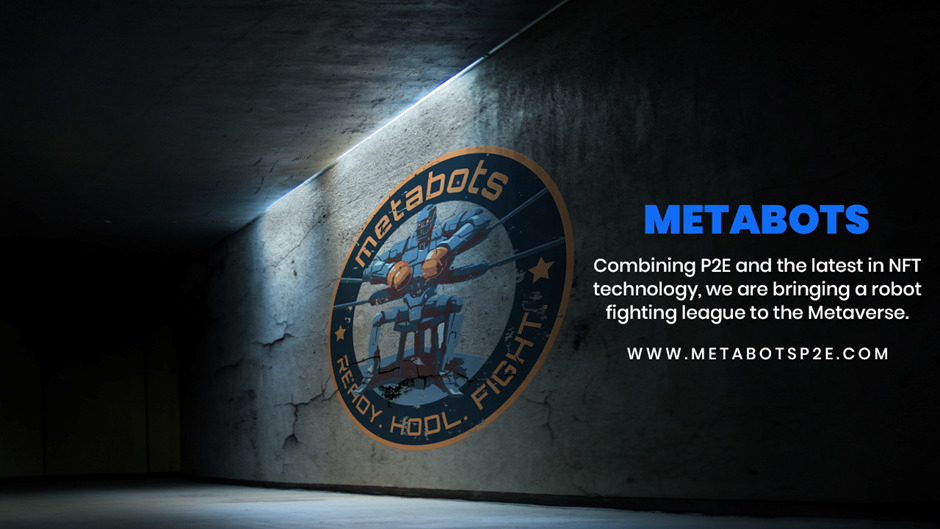 When fighting PvP, users will play for a wager against their opponent. The main goal of this project is to create an environment where players are able to earn a sustainable income through gameplay alone.

There will be multiple varieties of each component, meaning there will be a large variety of fighters. These varieties will result in over 24,000 unique parts and include:

The differences between robots will not be solely cosmetic, Metabots will make it possible to upgrade the same component of a robot several times, which will in turn create a variety of different gameplay affecting stats. (For example – Tungsten Metal and Silver Wiring will produce different stats to that of Tungsten Metal and Gold Wiring).

Not every difference in a component is visually visible on the robot in-game. Only the various metals will provide a visible difference. All other varieties of components are non-visible, but synergies will create a special in-game boost for the robot.

The overall objective of the game is to defeat the opponent by diminishing the opponent’s health bar.

Assigning different strikes and armour variations will be crucial to the robot’s success in the fight. Users can accomplish this by familiarizing themself with the game and by purchasing in-game NFTs to upgrade their robot.

Users will need a full robot to enter a battle against another player. It will be very important that a player’s robot is in peak physical condition before the battle commences. Any major changes to the robots can only be made pre-battle in the virtual garage. In later releases there will be a feature available in which players can improve their garage and truck, allowing players to adjust their robot within the arena.

The most prestigious fights will be played in the largest ring, allowing people to watch the fight live in the game and put a wager on who is going to win.

When users create a challenge, they select the prize for the winner of the match. The person that joins this challenge needs to match the contribution to fill the prize pot and start the fight.

During the initial launch, MetaBots will start with just the underground boxing arena. In future releases, as there is more traffic within the game, additional arenas and the first championship competition will be launched.

The aim is to create the ‘WRB’ (World Robot Championship) and differentiate it from the other leagues and arenas.

MetaBots will provide a marketplace that will allow all items (NFTs) to be traded. Players will be able to purchase items using MetaBots tokens or BNB. The marketplace will be accessible in-game.

MetaBots will also develop a complete browser-based environment where the player can not only check on the marketplace and their current offers, but also on previous matches, statistics of robots, and betting history. It will be possible for players to modify their robot without launching up the game itself.

Players will be able to place a wager on fights, whether they are taking part or spectating. There will be a matchmaking option that will allow players to select the amount of cryptocurrency in USDT ($) they wish to wage. This will search for other opponents with the same criteria.

This feature allows people to play the game and earn income by simply placing a wager on their favorite boxing robots and fighters.

MetaBots tokens to be used in the game can be bought through PSIDEX or PancakeSwap. The token has the following use cases:

The project tokenomics are:

The breakdown of the tax is as follows:

Setting the slippage to 11% when buying or selling MetaBots tokens is recommended.

Part of the MetaBots tax goes back into the project in the form of additional liquidity. This helps to continuously strengthen the project with every transaction.

MetaBots is partnered with the company Passive Income ($PSI). As a MetaBots token holder, users will also benefit by receiving rewards in the form of the PSI token from every MetaBots token transaction. The rewards will further compound as users receive additional PSI tokens from the Passive Income (PSI) project as it delivers its own projects and additional income streams.

The full road map for the project can be found on the website.

For further information, including background and history for the MetaBots game and more detailed information on gameplay mechanics, please refer to the whitepaper.

The MetaBots Presale will be held on 8th March 2022 at 7 PM UTC. The details are as follows:

MetaBots will launch on the Binance Smart Chain on 15th March 2022 at 7 PM UTC. Users can buy MetaBots tokens using either PSIDEX or PancakeSwap. MetaBots will be listed as a native token on the PSIDEX, meaning that users will not have to import the contract address manually to transact.

Disclaimer : There is no offer to sell, no solicitation of an offer to buy, and no recommendation of any security or any other product or service in this article. Moreover, nothing contained in this PR should be construed as any recommendation. Readers are encouraged to do there own research.