As time has gone by, IQ has been losing importance in Rainbow Six Siege’s meta. She lost her grenades a long while ago and attackers no longer rely on her gadget. In other words, right now, IQ is a mere spectator in the game.

Although her gadget is unique, she doesn’t bring anything special. If that wasn’t enough, her not being able to bring any projectile or throwable gadget — any kind of grenade —makes IQ almost obsolete. In conclusion, she is just useful in very specific tasks or situations.

In such a situation, adaptation is key. Being aware of her potential is pivotal. Here we will tell you how you can use IQ on the battlefield.

Monika Weiss was a prodigy in math, science, and music, coming from a family whose parents encouraged her to focus on studying. According to Ubisoft, IQ completed her first internship with a “local tech company at the age of 16.” Later on, she was invited to MIT, as she joined to work on research in Microelectronics.

She returned to Germany to work in the military police, just before joining the Bundespolizei (BOL). Two years later, she was recruited by the GSG 9. 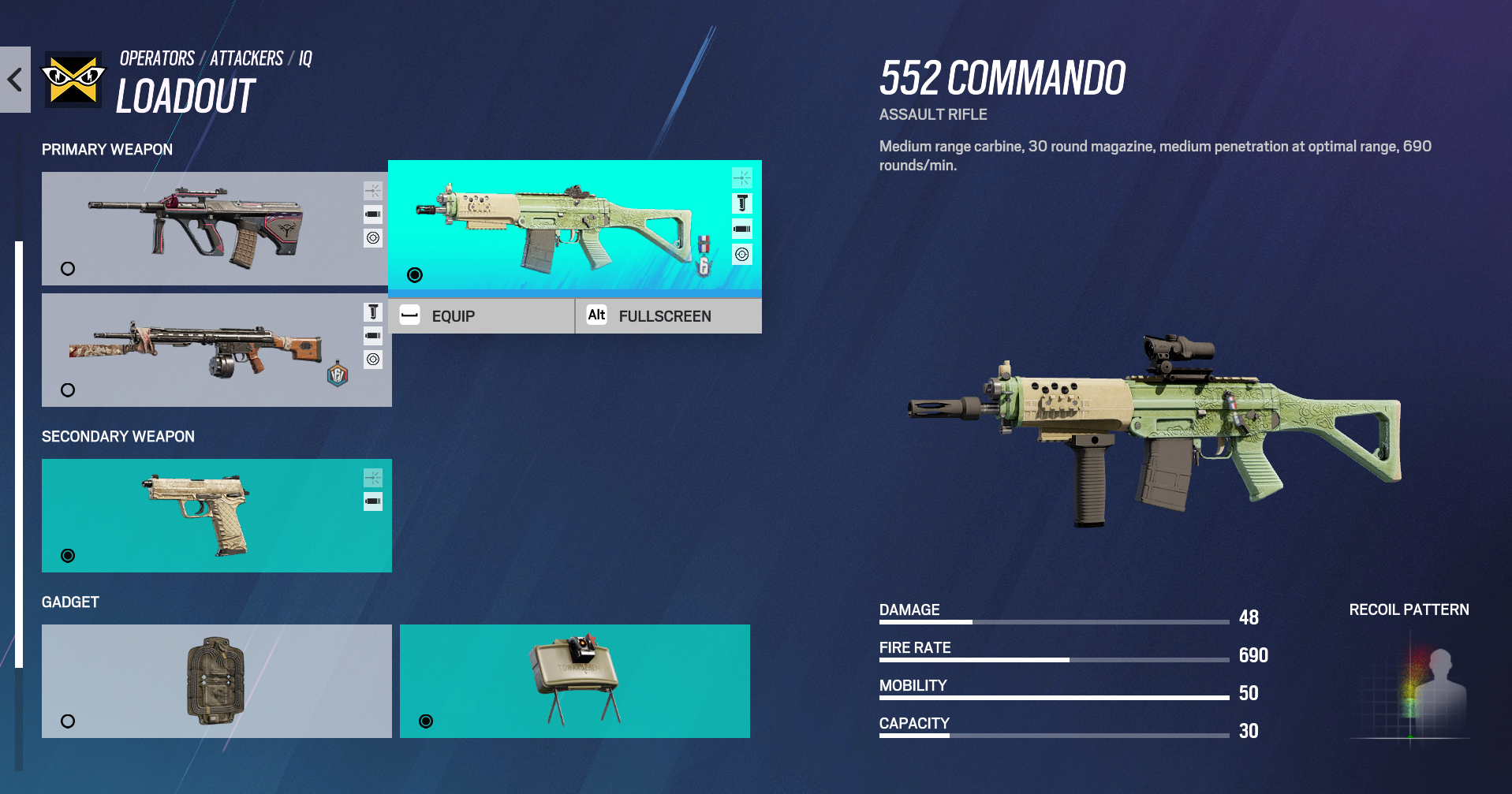 IQ’s primary options possibly are her best trait. The German operation has a great range of weapons, and she can decide between higher damage (Commando), less damage, higher capacity, and a higher fire rate (G8A1), or a mix of both (AUG A2) which also includes an x2.5 sight.

Sadly we can’t say the same regarding his secondary gun since she can only bring the P12, which is the GSG 9’s main gun.

Meanwhile, IQ can be equipped with three breaching charges or a claymore. As we mentioned before, this part of her loadout makes IQ almost obsolete in the current meta.

IQ can be played in many roles. Considering that she is a three-speed, one-health operator (and keeping in mind the gun power she has), IQ can play as an entry fragger. However, players usually go for other options such as Iana, Ash, or Zofia to play in this role.

The German operator can also be played as a support, giving information to attackers by droning and using her special gadget. However, with defenders not being able to throw cameras outside the building, IQ is in a tough place now.

How to use IQ’s gadget in Rainbow Six Siege

IQ’s gadget is the Electronics Detector. With it, IQ can detect any electronic gadget within 20 meters.

Players usually pick IQ when they know there is a Valkyrie or an Echo in the defenders’ roster. IQ is useful as she can detect Valk’s cameras and Echo’s drones, and destroy them from any part of the map by shooting them.

So, let’s say, there’s an Echo drone on the ceiling of Consul Office on Consulate. By using her gadget from Piano Room, she will be able to spot it and shoot it. It is a way to help the attackers at planting.

However, IQ’s presence is in a constant downfall. Echo’s Yokais aren’t invisible anymore and are now visible to the naked eye. Meanwhile, Valkyrie not being able to throw cameras outside of the map means players won’t have to bring an IQ just to detect them. Basically, by patching these two defenders, Ubisoft has condemned IQ. Why bring her when someone else with better utility can do the same job?

It is worth noting that IQ can do cool things with her gadget. As she can detect any kind of electronic device, IQ can spot operators like Vigil or Pulse when using her gadgets. You can use IQ’s gadget to get cool kills through soft floors or walls if you detect them. The same can be said of defenders using cameras — the cell phone they use is an electronic device, duh!

Something similar happens when defenders start the defusing animation. As they use an electronic device for it, IQ can take advantage of it by using her Electronics Detectors and shooting at the defender when this starts the animation.

However, all of the previous situations are very particular. That’s why we think IQ can be used if you master her and have great adaptation skills in Siege. If you want to use IQ, you can! But keep in mind, you can probably have a better impact by bringing someone else. IQ is just fine but unfortunately not what the meta asks for nowadays.

IQ’s gadget doesn’t have any special counters other than Mute’s jammers. In terms of role, as an entry fragger, trap operators such as Lesion, Kapkan, or Frost can stop her and any other operator behind.

These are some of the best skins in the game for IQ. 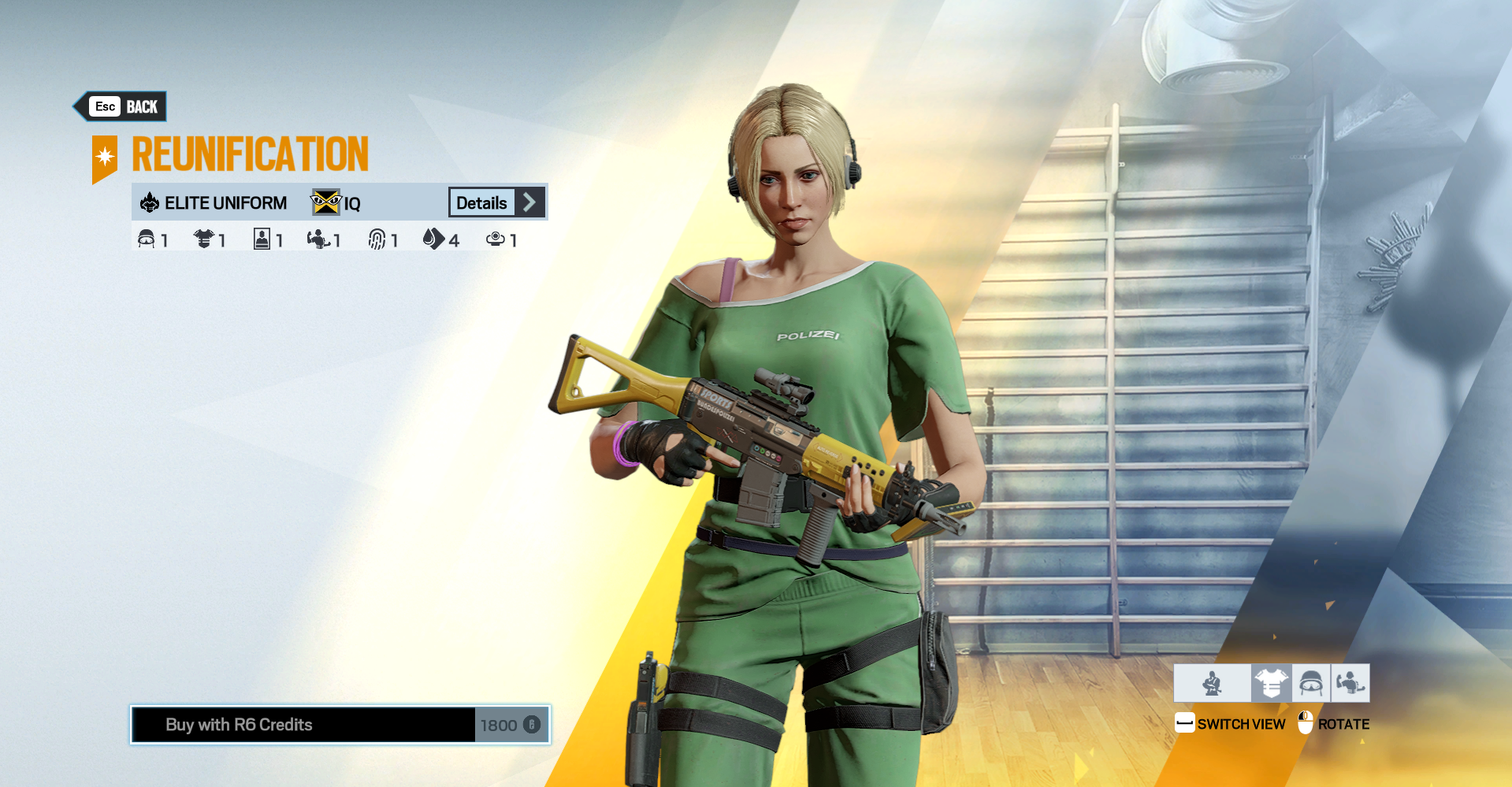 IQ’s elite bundle is the Reunification, inspired by Germany’s reunification which took place in 1990. The set’s price is 1800 R6 Credits. 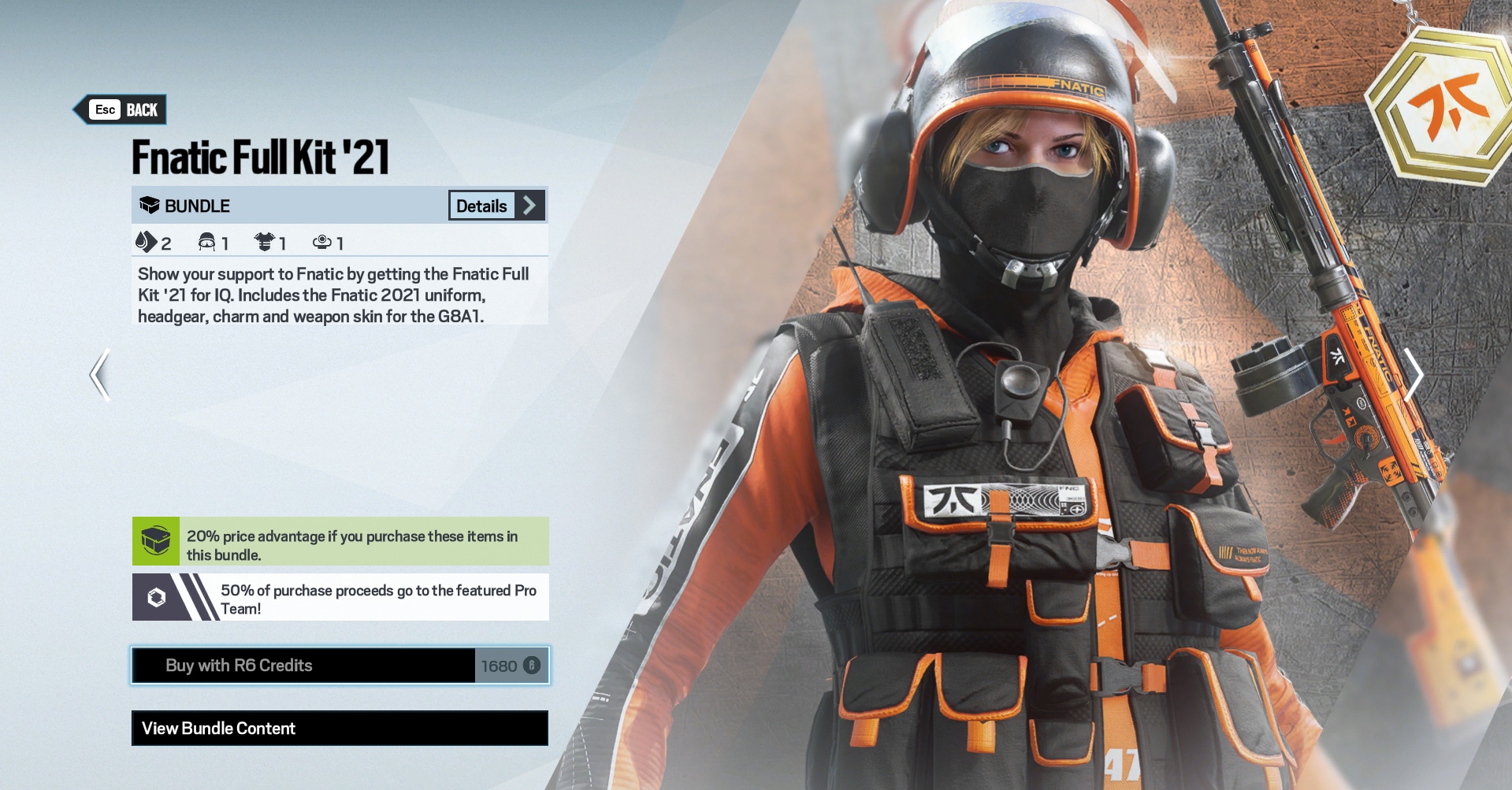 IQ was the Fnatic’s chosen operator to represent the APAC team in 2021. With the orange and black colors that represent the brand, IQ is ready to take over the battlefield. The bundle currently costs 1680 R6 Credits. 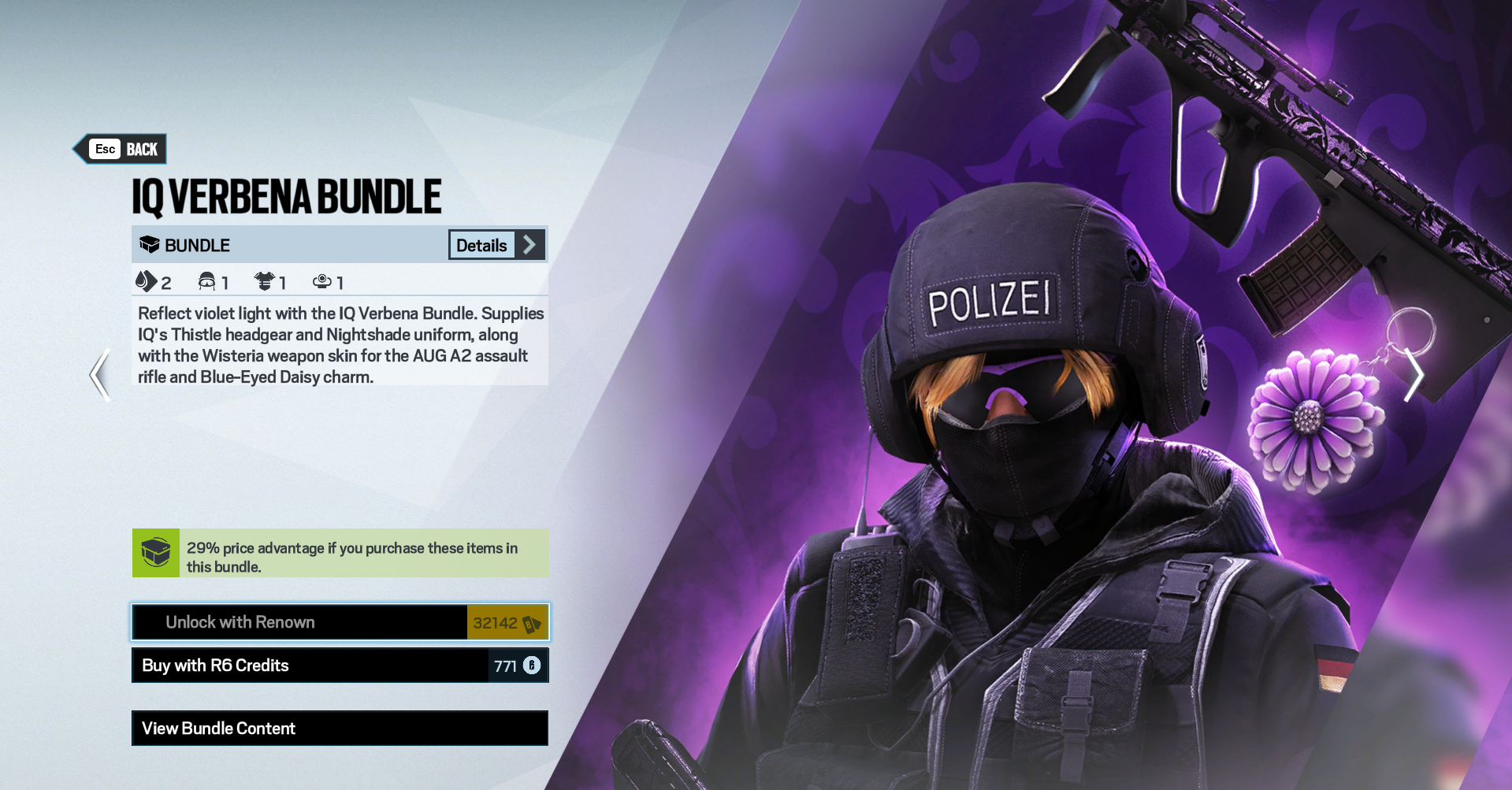 Last but not least, we have IQ’s Verbena bundle. The bundle includes a skin for the AUG A2, a fantastic universal charm, and the uniform and headgear seen in the picture. The good thing about this bundle is that you can use the skin for Wamai’s AUG A2. It’s also the cheapest of the three, as it currently costs 771 R6 Credits.