Nvidia ( NVDA 1.72% ) investors are having a forgettable year so far. Shares of the tech giant have dropped substantially in 2022 for several reasons. From the Federal Reserve’s hawkish stance to Nvidia’s abandoned acquisition of Arm and the market giving a thumbs-down to Nvidia’s latest quarterly results, a lot has been going on that has dented investors’ confidence. However, some Wall Street analysts believe that Nvidia could deliver impressive upside.

Nvidia stock sports a price target of $400 at the high end, which would translate into 70% upside from its close on Feb. 22. The average analyst estimate is $346, which would be a 48% jump. With catalysts such as the metaverse coming into play, it wouldn’t be surprising to see this tech stock fly higher in the future.

Nvidia is getting a boost from the metaverse

Nvidia released terrific results for the fourth quarter of fiscal 2022 on Feb. 16, with revenue increasing 53% year-over-year to $7.6 billion and adjusted earnings rising 69% to $1.32 per share. The data center business played an important role in this impressive growth, and accounted for 43% of the company’s revenue.

Nvidia’s data center revenue increased 71% year-over-year, and one of the reasons behind its terrific growth was Meta Platforms ( FB 1.39% ). Meta Platforms last month announced the development of the AI Research SuperCluster (RSC), which it said would would become the world’s fastest AI (artificial intelligence) supercomputer when it is completely built by the middle of this year. Meta Platforms is using Nvidia’s GPUs (graphics processing units) to power its supercomputer. 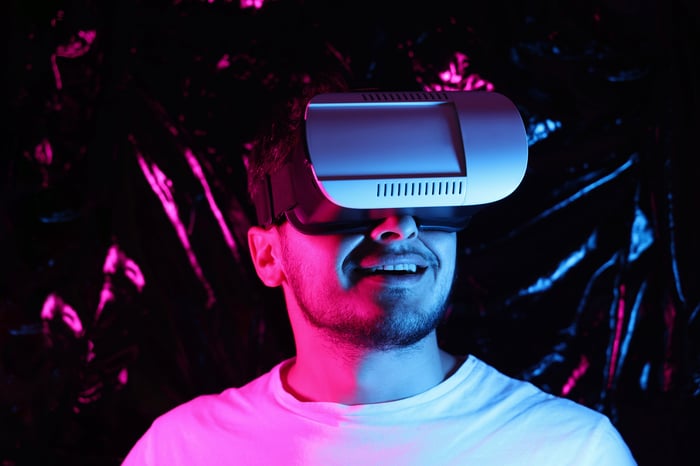 Meta Platforms believes that “the work done with RSC will pave the way toward building technologies for the next major computing platform — the metaverse, where AI-driven applications and products will play an important role.” The metaverse lets people interact in a virtual world.

The supercomputer is currently being powered by 6,000 of Nvidia’s A100 data center GPUs. Nvidia says that the RSC will eventually be powered by 16,000 A100 GPUs to deliver a bigger increase in AI performance.

And this is not the only way Nvidia is building the metaverse and setting itself up to benefit. Nvidia’s Omniverse platform is gaining traction, as it allows engineers, designers, and developers to make “physically accurate digital twins of buildings and products, or create massive, true-to-reality simulation environments for training robots or autonomous vehicles.”

Nvidia said in November that this platform is being used by more than 700 companies. Its adoption is likely to increase further, as the metaverse will create the need for more simulated digital worlds. A third-party report forecasts that the digital twin market could grow at an annual rate of 58% through 2026, and hit $48 billion in value.

Nvidia stock isn’t cheap despite its pullback in 2022. The stock is trading at 60 times trailing earnings and 22 times sales. For comparison, the S&P 500 has a price-to-earnings ratio of 24 and a price-to-sales multiple of 2.85.

But Nvidia’s rich valuation seems justified considering the outstanding growth it has been clocking quarter after quarter. What’s more, Nvidia stock is available at a big discount from last year, when it was trading at 30.6 times sales and 90.6 times earnings.

The company’s rapid growth seems like it is here to stay, as its guidance calls for 43% year-over-year revenue growth in the current quarter to $8.1 billion. Even better, analysts expect Nvidia’s impressive momentum to continue for at least the next five years, with annual earnings growth of 34.7% predicted over that time frame. The growing metaverse opportunity could help Nvidia clock even faster earnings growth in the long run.

This is why now looks like a good time for growth investors looking to add a metaverse stock to their portfolios to consider Nvidia.

This article represents the opinion of the writer, who may disagree with the “official” recommendation position of a Motley Fool premium advisory service. We’re motley! Questioning an investing thesis – even one of our own – helps us all think critically about investing and make decisions that help us become smarter, happier, and richer.