Your WFH Office Is Now A TV Studio – Newstalk ZB

The new normal. Okay, there isn’t really a “normal” anymore but everyone keeps calling it that anyway. Although the future has never been more difficult to predict, one thing seems certain; work habits have changed forever.

Even if you’re back at the office by now, chances are it’s not every day and it’s even more likely the events and meetings you used to attend in person have now moved online.

And why not? If the pandemic has proved anything it’s that we actually had the technology sitting there waiting to make remote working more possible than any of us thought.

So now we’ve got it working, it’s probably time to streamline and upgrade. If we’re going to keep doing it, let’s do it better. 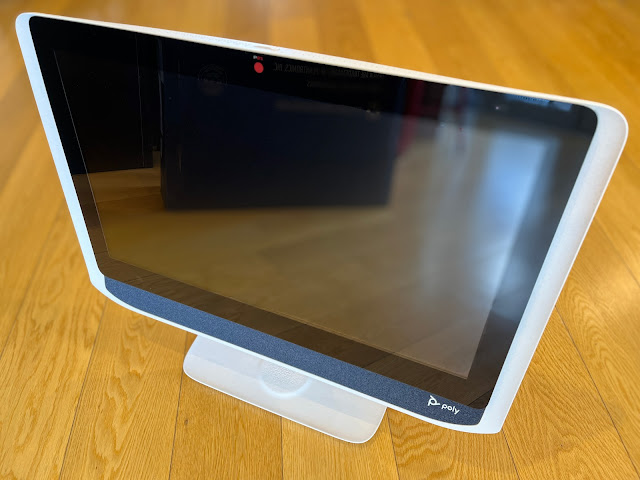 The Studio P21 from Poly is kind of a one-stop-multi-media-shop that connects to your existing Mac or PC via a single USB cable. It’s a 21-inch display, a camera (with privacy shutter), stereo speakers, mic and ambient lighting – all in one very tidy package.

First off, it’s just a great external display. If you’ve been battling away, squinting at a little laptop screen the whole time you’ve been working at home, this is a fine way to get some serious screen real-estate back. Even if you’re happy with your existing monitor setup, never underestimate the advantages of adding a second screen. Even as I write this, I have this page open on my main screen and the Poly website open on the Studio P21 for easy reference, without having to click between tabs. That’s just the beginning of course. Audio and video editing becomes much more intuitive if you can have the controls on one screen and the files on the other. And that’s before you get to the main reason this product exists at all – video conferencing. There’s no reason you can’t keep working while taking part in an online meeting – a dual screen array is ideal for that. 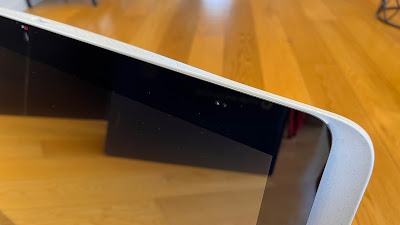 At first it seems oversized for what it is; a 21-inch monitor is already pretty substantial on most desks and the Studio P21 is a lot taller and wider than just the display itself. There’s a kind of slightly curved shell that wraps around the back, reflecting both light and sound towards you. The concealed vanity lighting that runs down each side of the screen is a big part of what makes this device so unique. Normally to enhance the lighting for your video calls requires a whole extra accessory, which just takes up more desk space when not in use. Not here, it’s all included. 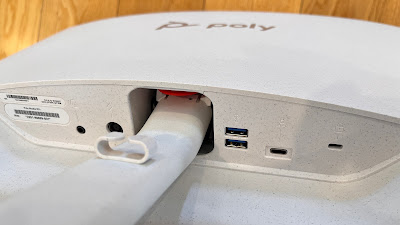 Meanwhile the whole thing sits on an attractive enough, off-white stand which slots into place with a single click. The stand also doubles as a useful storage tray for things like phones and earbuds – a very useful storage tray, as it turns out. If your phone and buds charge wirelessly, there’s a charging pad for them right there in front of you. What a fabulous little add-on. 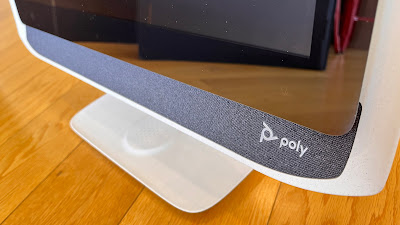 The full fidelity stereo speakers produce surprisingly warm and spacious tones – not just clear reception on video calls but it’s actually worth setting the Studio P21 as your default speakers if you don’t already use external ones for your laptop or desktop computer. Music sounds rich and there’s way more bass than you’d ever hear from anything a laptop would produce.

Setup is relatively straight-forward, although it does involve downloading and installing not one but two different apps for some reason. You’ll need Poly Link Desktop to adjust all the settings and the Display Link drivers so your source device knows what to do with the Studio P21 when you plug it in. This is via the supplied USB lead with its own USB-C adapter attached if required.

Once powered up, you can jump into the Poly Link Desktop to configure all the usuals; brightness, contrast, backlighting etc. There are also status LED’s you can set to notify you of your call status, if a device is charging on the wireless pad or even if the Studio P21 is just idle. Needless to say, I turned them all off. I hate LED status lights.

What is useful are the “Rocket” and “App” buttons; two touch controls on the bottom left bezel which can be cutomised do things like answer calls, turn the ambient lights on and off and launch apps like Zoom or Teams.

I had an issue getting the App button to start anything on my Mac, even though its icon would change to that of the associated program when I set it up. I also experienced a frozen feed if I started my video app before opening the Poly Link Desktop controls window. This was easily sorted by restarting my video app and I assume it’s just one of those niggly compatibility issues you run into every now and again when using non-Apple accessories with a Mac. I wouldn’t be surprised if everything functions flawlessly on PC.

That’s been my only bugbear though. I’ve loved having the versatility of a dual screen setup at home and obviously it would be equally useful in most office environments too. The display is large, clear and bright – not the brightest I’ve encountered but bright enough. Certainly, both the mic and speaker quality are standout and having all that, plus ambient lighting, integrated into one simple device is a godsend.

If you have to work at home, at least know you don’t have to work tied down to that tiny laptop anymore. I’ve seen the Studio P21 advertised for under NZ$1500.00 and I consider that to be pretty good value given it’s essentially four or five cool gadgets in one. At least.